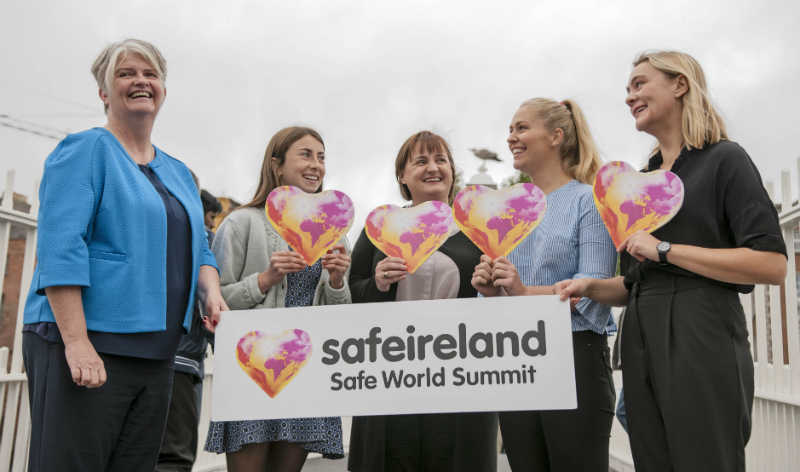 Safe Ireland today announced the line-up of world renowned speakers for its upcoming Safe World Summit, which is seen as one of the most important events on gender equality and ending gender based violence on the global calendar this year.

Safe Ireland also confirmed that it is in close contact with the office of the First Minister of Scotland Nicola Sturgeon MP to secure her attendance at the Dublin Summit.  Ms Sturgeon’s leadership is regarded as being pivotal to the many pioneering cultural and institutional changes that have moved her country closer to eradicating violence against women, in particular partner violence.

The Safe World Summit will take place in just over four weeks’ time on October 22nd and 23rd in Dublin’s Mansion House. The 2018 event follows the highly successful inaugural 2016 Safe Ireland Summit which was credited as a catalyst for many positive developments in Ireland, including the recognition of the offence of coercive control in the new Domestic Violence Act 2018. Safe Ireland is the national social change agency working to make Ireland the safest country in the world for women and children.

The Summit will also be attended by Dr Edith Eger, celebrated Holocaust Survivor, Clinical Psychologist and Author of the international and Ireland’s current best-selling book ‘The Choice: Embrace the Impossible.’  This will Dr Eger’s first speaking trip to Ireland and one of a few to Europe.  Other speakers making their first trip to Ireland include survivors and activists Luke and Ryan Hart, whose mother and sister were murdered by their father, and activist Marai Larasi, who accompanied actress Emma Watson to the Golden Globes in recognition of her work for ethnic minority women.

Sharon O’Halloran, CEO of Safe Ireland said that many international speakers have made the decision to travel to Dublin because of the emphasis on equality, safety, healing and love central to the Safe World event. Safe Ireland believes that Ireland is ideally placed to play a leading role in re-shaping a world that is safe and equal again.

“Our Summit is happening as a time when we are witnessing a regressive resurgence of domination and fear politics across Europe and the world,” Sharon O’Halloran said. “We know from dark periods of history that fear and domination politics enables abuse of power and control in intimate relationships.”

“At this crucial time, we need to understand more about the links between the global problem of gender based violence and the impact of the trauma it leaves in our homes and communities. We have to develop a whole new world view that is built on equality, tolerance, safety and love.  This means designing and implementing innovative new solutions that address the inequality that is at the root of violence, abuse and fear.  And this must start with addressing violence, dominance, control and fear in the home.”

Safe Ireland said that it is delighted to be partnering with Spunout.ie to ensure that there is active youth engagement throughout the Summit.

“Young people play a particularly important role in ending gender based violence in our communities,” said Kiki Martire, Spunout.ie’s Outreach and Training Officer. “Many grow up with violence themselves and they often lack the same access to support and services as those older than them. And, of course, younger people will be the ones to lead the charge to change our culture and end this violence in the future. This is why SpunOut.ie is particularly excited to bring the young people we engage with to the table this October so that all at the Safe Ireland Summit can learn from their fresh and necessary perspectives.”

Other renowned international speakers include Dr. Riane Eisler, gender equality pioneer and systems scientist, lawyer and author; Lynn Rosenthal, the former White House Advisor to President Barack Obama on Violence Against Women; and Robert Jensen, Professor Emeritus of Journalism and author of The End of Patriarchy: Radical Feminism for Men.

For more information about the Safe World Summit and to purchase tickets for the two-day event, go to https://www.safeireland.ie/summit/about-safe-world-summit-2018/

It’s going to be unforgettable

Here’s a taste of the over 30 speakers confirmed so far for the Safe Ireland Safe World Summit.

Marai Larasi, Executive Director of Imkaan and Co-Chair of the End Violence Against Women Coalition (UK), who accompanied Emma Watson to the Golden Globes this year.

Robert Jenson, Professor Emeritus of Journalism at the University of Texas, Austin, and author of The End of Patriarchy: Radical Feminism for Men.

Helen Walmsley Johnson, Author of ‘Look What You Made Me Do’, Columnist and Survivor who experienced coercive control by a “smiling” abuser, twice.

Luke and Ryan Hart, whose mother and sister were murdered by their father, and who have become strong survivor advocates against violence against women.

Insia Dariwala, Award Winning Filmmaker and Activist, Founder of the Hands of Hope Foundation in India, advocate against the abuse of girls and boys and activist against Female Genital Cutting.

Monica Ramirez, Activist, Author, Civil Rights Attorney who has focused her work on ending gender-based violence in the workplace for Latina and immigrant women.

Ailbhe Smth, Feminist, Activist and LGBT campaigner, co-director of the Together for Yes campaign to repeal the 8th amendment, leading campaigner for Marriage Equality referendum.

Suzanne Connolly, Survivor and Advocate, who waited 34 years to see her abuser, her adoptive father, sentenced in court.

Kathleen Chada, Survivor and Activist, whose two sons were murdered by their father and who now campaigns through the group SAVE for tougher sentences for perpetrators.

Women are still deterred from reporting violence
Scroll to top