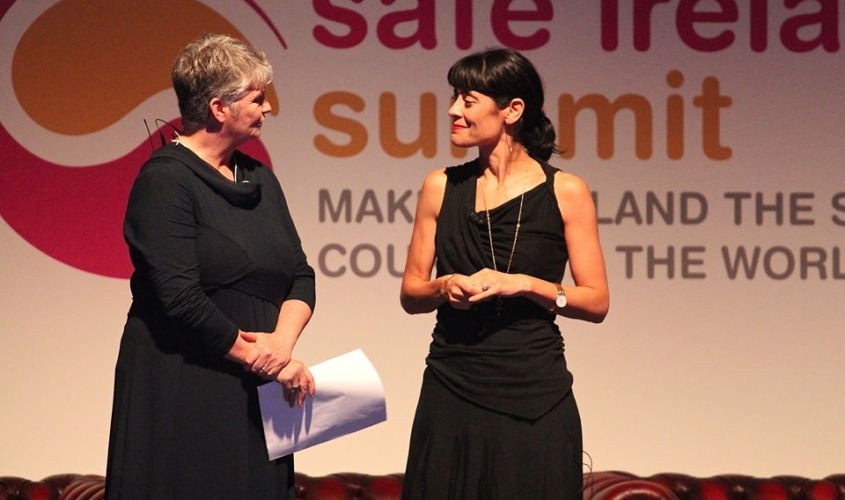 The most ambitious event on domestic violence ever created in Ireland comes to life.

On the 14th and 15th of November 2016 over 200 people from all over Ireland, America, Norway, Australia, Canada and Hawaii, joined 53 world and homegrown thought leaders in the Mansion House. The reason that the Summit attracted this caliber of speakers and delegates was because of SAFE Ireland’s work towards its vision that Ireland can become the safest country in the world for women and children. 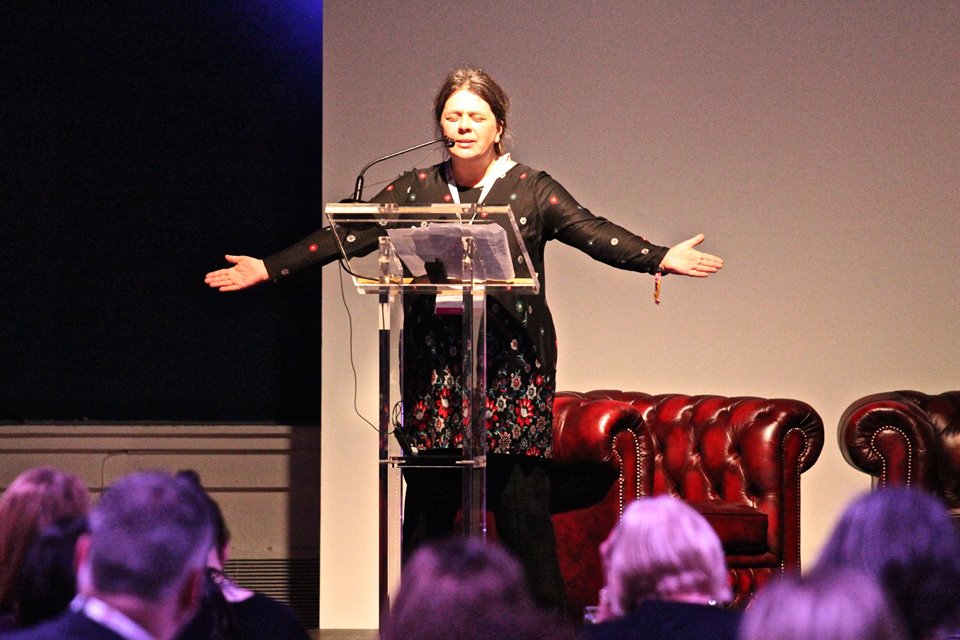 Maria Dempsey, mother of Alicia Brough who was murdered six years ago to the day of the Summit, chose the SAFE Ireland Summit to speak for the first time. She was giving a voice to her daughter and to the many other women “who are not with us” because of domestic violence and homicide. Maria ignited the atmosphere for the two-day Summit that followed.

She encouraged people everywhere to speak out about domestic violence and to take action against all forms of violence, including being a more open and communicative society that can talk about how we feel including when we have murderous thoughts. She also called the media on their reporting of her child’s murder and reminded us at the Summit and in the press interviews she took part in around the Summit of the responsibilities we have in how we choose to talk and write about violence.

Maria’s daughter Alicia was staying with her friend Sarah and her children because Sarah was afraid of her abusive ex-partner, John Geary. John was found guilty of murdering his ex-girlfriend, his baby daughter Amy, his stepson Reece and Maria’s daughter, Alicia.

“After six years I want to give voice to Alicia and so many other women who are not here with us because they were taken, viciously, unjustly, violently.” she said from the SAFE Ireland Summit stage.

“We have to create an Ireland where all voices are heard, even those saying things that are difficult to hear,” she continued.  “Where someone can say ‘no, I’m not fine’.  Where, without judgment, someone can say ‘I feel so angry, I feel murderous’.  That we listen to and know what to do with murderous and suicidal words.”

SAFE Ireland created this space in the Mansion House, a stage from which speakers, thinkers, advocates, activists, and artists could speak and share ideas, be together with the purpose of action towards a safer world for women and children. In a world where mainstream platforms for social discussion are often censored, or access restricted, it is as important now as it ever has been to create our own spaces. Personal stories were shared with purpose, professional experiences were explained and commitments were made to take what was learned during the Summit out into the world and to challenge the culture we all live in that facilitates domestic violence.

Lynn Rosenthal, the first ever Advisor to the White House on Violence Against Women and Táinaiste Frances Fitzgerald, shared their journeys from the grassroots through to their government positions.

The Táinaiste said that she believed SAFE Ireland’s vision was achievable – that Ireland could be the safest country in the world for women and children. 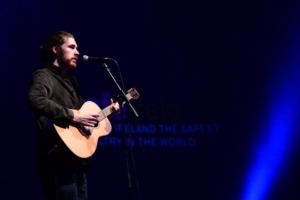 Hozier performed his song Cherry Wine and told Claire Byrne that activism on this issue  “[is] important now more than ever. On a grassroots basis, the most powerful man on the planet was elected after talking and joking in a bragging context about sexual abuse towards women and was elected still,” said the singer. “I think it’s an uphill struggle.” You can listen to Hozier in conversation with Claire Byrne here

Leigh Goodmark, Dr. Nata Duvvurry, Bronwyn Winter, Linda Hamilton Krieger,  and Helen Lowey made sense of the legal, economic and policy issues relating to domestic violence, while Karen Ingala Smith shone a light on the number of women who have been killed by men in the UK, why she decided to count them and why we have to talk about the extent of men’s violence towards women. 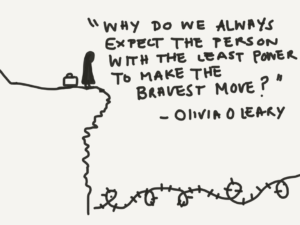 Mona Eltahawy, Colm O’Gorman and Ivana Bacik set the stage alight with their energy and activism relaying their personal experiences of disrupting what is political. Olivia O’Leary seemed to get to the crux of one of the major problems in Irish society when she asked, “Why do we always expect the person with the least power in the situation to make the bravest move?” A quote that delegate, artist Lisa Fingleton illustrated so evocatively.

You can listen back to Olivia’s speech here

We spoke boldly about how we could redesign society, how culture could change culture, how patriarchy was harming us all.

As a performer and writer Carlos Andrés Goméz contribution was as evocative as it was powerful. He dedicates himself to dismantling compulsory, patriarchally – determined manhood which impacts so abusively on women, girls, gay and transgendered people as well as on men themselves. Listen to Carlos here

Louise O’Neill spoke of her belief in the power of art to shape the way we see ourselves and transform the world so that the culture becomes one that values women and men equally.

Panti Bliss closed the first day of the summit calling on us to challenge culture’s rigid gender boundaries, so that we are not bound by convention and can dream a future that is about kindness, love and empathy. Listen to Panti here.

Day 2 opened with Dr. Gabor Mate outlining how and why all the major causes of virtually all human dysfunction emanate from the impact of childhood trauma. Dr. Stephanie Holt spoke of how the voice of the child is paramount in the context of domestic violence. Dr. Rhona Mahony suggested the first step to supporting women experiencing domestic violence is us, the bystanders, having this conversation. John Lonergan the former Governer of Mountjoy recalled his experience working with prisoners and described how they too were once innocent babies who became disconnected, poor, alienated adults. Encouragement, love, praise and compassion are what John believes people need. 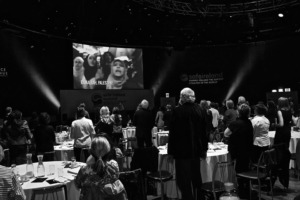 ought the Summit audience to their feet as they joined the One Billion Rising. One billion – the number of women who will be raped or beaten in their lifetime. The Summit audience rose to dance in defiance of the injustices women suffer, demanding an end at last to violence against women. You can listen back to Eve’s speech here.

Dr. Mary McAuliffe brought us on a journey through history as she recalled the women revolutionaries of the 1916 rising. Inspiring us to remember, recognise and build on their daring work. Dr. Cris Sullivan continued in that vein urging us to be bold in our work. Mark Pollock was inspirational as he spoke of making the impossible possible.

Simone George highlighted that one in three women in Ireland have experienced domestic violence. And while we heard shocking statistics on the reality of domestic violence in Ireland over the course of the 2 days, Louise O’Neill wrote later in the Irish Examiner that the Summit, “…wasn’t self-pitying or plaintive, although there were heart-rending stories of abuse told; it was a showcase for strength, determination, a ferocious energy crackling through the Mansion House like a live wire.”

Simone called for a more open discussion on the problem adding that, “the home is the last Irish institution to be opened up.” 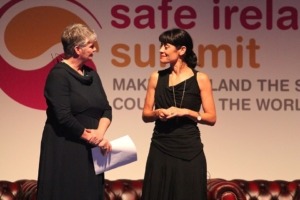 Sharon O’Halloran, CEO of SAFE Ireland, said that Ireland could lead the “social revolution” that is needed to eradicate domestic violence. “Domestic violence and domestic homicide is everyone’s business,” she said.  “We need a social revolution to bring this issue into the open, to address it seriously, to see it and treat it and name it as the barbaric crime that it is. I have faith in my country to lead the way, to be the safest country for women and children.

“First, however, we have to address some home truths.  In Ireland we haven’t quite figured out how to talk about the fact that not everyone is born into or lives in a lovely, safe home.  We need to wake up to the unassailable fact and evidence that the most dangerous threat to women’s safety comes from within the home, within their relationships.”

The real danger to women is within their own home