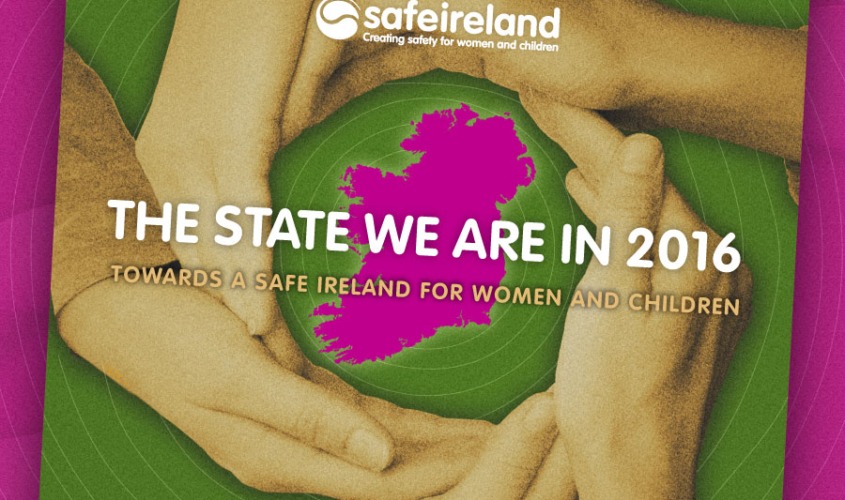 SAFE Ireland warned that homeless figures and needs are being greatly under-estimated because over 4,000 women and children being accommodated on a yearly basis in emergency refuge accommodation are not being counted and recognised as being homeless.

At the recent launch of a new SAFE Ireland report The State We Are In, CEO Sharon O’Halloran stressed that women and children forced to leave violent homes are being caught in the cross-fire of the national housing crisis. She said that 37 services that participated in new housing research as part of The State We Are In are reporting that they have never seen things so bad for women and children. 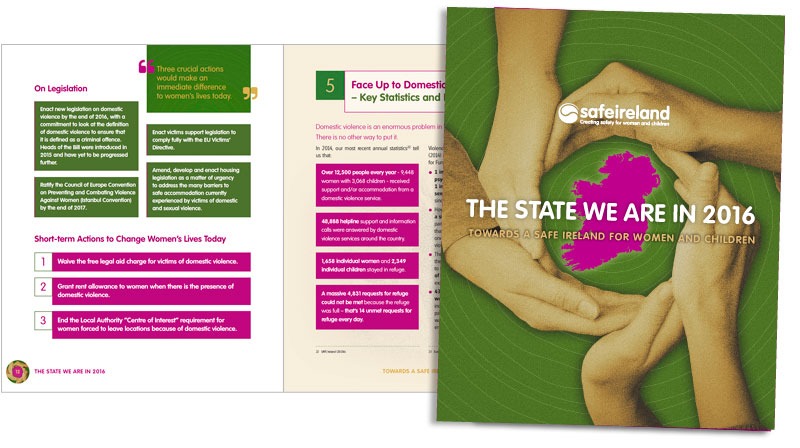 Download The State We Are In report here (7Mb PDF)

O’ Halloran said that this situation is all the more distressing because indicative research into women’s interactions with the criminal justice system, also compiled as part of The State We Are In, gives fresh insight into the frequency and severity of violence experienced by women. The interviews with 40 women show that two-thirds of them had experienced physical abuse on at least a weekly basis. For one third of research participants, physical, emotional or psychological abuse was a daily feature of their relationship. Half reported that they had experienced a serious threat to their lives (e.g. attempted strangulation) in the first incident of violence, belying the notion that violence escalates over time. SAFE Ireland stressed that a large-scale study was required to explore these findings more. However, the mixed method tool used in the new study provides rich understanding of the reality of violence, it said.

“This new evidence is indicating that some women and children may be experiencing violence every day of the year,” O’Halloran said. “Yet, when they escape this violence and look for two fundamental rights – access to a safe home and access to a justice system that responds to them seriously – they are being failed abysmally.”

“Domestic violence is simply not on the homeless agenda,” she said. “According to local authority practice, women leaving violent homes are not being considered homeless; they are seen as being out of home, as they have a home, albeit an unsafe, violent one. They are being rendered invisible when it comes to their right to a safe home.”

The new housing research shows that because of external barriers to housing – spiraling rents, low or no housing stock and inadequate or unavailable rent allowance – women are staying in refuge for longer than ever. The knock-on effect is that the needs of thousands of women also looking for emergency accommodation cannot be met because refuges are constantly full.

The emerging bank of research into women’s interactions with all levels of the justice system tells an equally dismal story, O’Halloran continued.

“Perhaps most stark and telling, our most recent legal research tells us that it is highly improbable that a domestic violence case will actually form the basis of a criminal prosecution. Domestic violence is not a crime under Irish law and so it continues to be dealt with – not as a serious offence – but as a lesser matter even though our research tells us that women are being threatened with their lives daily.”

O’Halloran said that while the picture of domestic violence remains grim, there have been welcome developments over the past years, including progressive systems responses from the Gardaí and the Courts Services. She called on all political parties and independents to make domestic violence a priority issue as a critical measure of a better, more caring Ireland.

SAFE Ireland called on the new Government to take decisive action in the first 100 days of its term. It called for the allocation of an additional €30 million annually to address gaps in struggling services from the Gardaí to specialist domestic violence services. It also called for political leadership, with the appointment of a Minister and Department to spearhead a determined response to domestic violence, including the enactment of vital legislation that would define domestic violence as an offence.

SAFE Ireland stressed that three short-term actions could change women’s lives immediately. It called for a waiver to the free legal aid charge for victims of domestic violence, for rent allowance to be granted to domestic violence victims immediately and an end to the local authority “centre of interest” requirement which means that women can only be assessed for housing in the county where they were living. Many women have to leave their locality because of the threat of violence.

President Michael D. Higgins holds event for MAN UP and HeforShe at Áras an...