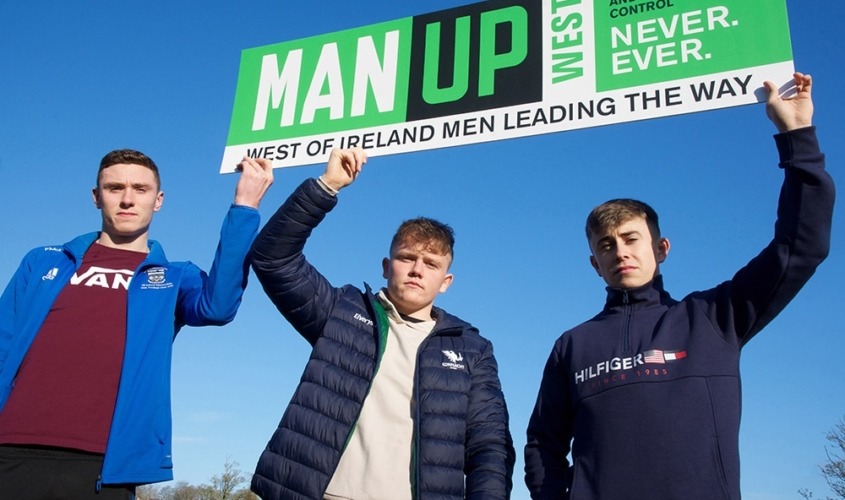 This week sees the launch of a new inspiring and brave campaign to harness the voices, concerns and activism of men and boys across the West of Ireland to play their role in helping to change the face of domestic violence and coercive control in the province.  Man Up West coincides with the global 16 days of action against violence against women.

Man Up West is a Safe Ireland campaign.  Man Up was originally launched as a national campaign in 2012 and ran for many years with champions ranging from rugby star Rob Kearney to broadcaster Ryan Tubridy.  However, this is the first time that the campaign has focused on a specific region.  This year, it is reaching out specifically to younger men in the West, inviting them to stand with their partners, sisters, friends and mothers against domestic abuse and coercive control.

Safe Ireland is the national social change agency working to end domestic abuse and coercive control.  It collaborates with 38 domestic violence support organisations across the country.

Man Up West is rooted in evidence.  Safe Ireland undertook preliminary research on attitudes to gender equality, roles and responsibilities and awareness and attitudes to domestic abuse and coercive control.  In focus groups held in the West of Ireland, this research found that “lad culture” is an issue of particular concern to younger women, and one that is often excused by mothers and fathers.

It also found, however, that, overall, more progressive attitudes towards gender equality and roles are often found in more rural regions, including Connacht.  In addition, it indicated that there is much greater awareness and understanding of domestic abuse and coercive control in more rural regions, again including Connacht, than urban areas.  Some of the most rigid views towards gender were expressed in Dublin.

“This campaign is about men and boys in the West of Ireland leading the way on helping to end the hidden terror that is domestic abuse and coercive control,” said Sharon O’Halloran, CEO of Safe Ireland and Mayo Women’s Support Services.

“We are focusing on the West of Ireland in this campaign because we know from our research that while there would seem to be a propensity towards the continuation of a lad culture that is disrespectful of women, there is also amazing evidence that the vast majority of young men are proud to play their part in making Connacht the safest province for the women and children they live with and love.”

“This is a really exciting, positive campaign that is asking young men to call out lad culture for what it really is, which is coward culture.”

The campaign will launch on Monday, December 2nd with radio ads across regional radio stations, posters, leaflets and a social media campaign.

Men are asked to do three simple but powerful things to support the campaign:

The campaign is supported by the Community Foundation for Ireland.

10,782 women and 2,572 children receive support from a domestic violence service...
Scroll to top