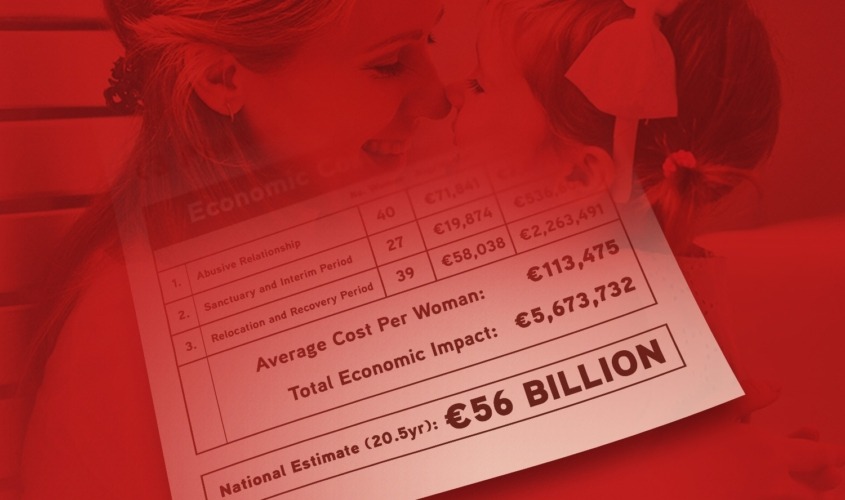 A new Safe Ireland and NUI Galway research report, published today, finds that the aggregate cost of domestic violence to a woman, over her journey from abuse to safety, is approximately €113,475 over a time span of 20 years or more. The new report is the first to assess the indicative economic and social costs of domestic violence in Ireland.

Based on the individual estimate, the report assesses that the national cost of domestic violence to survivors is an estimated €56 billion over a 20.5 year journey – a total cost that is based on the most comprehensive study of the prevalence of violence against women in Ireland (Fundamental Rights Agency – FRA – 2014). While the cumulative cost of domestic violence is a more useful measure of the economic impact of DV over a “lifetime”, according to the researchers, it does indicate that domestic violence is costing women survivors at least €2.7 billion each year.

Assessing the Social and Economic Cost of Domestic Violence was undertaken for Safe Ireland by researchers, Dr Nata Duvvury and Dr Caroline Forde, of NUI Galway’s Centre for Global Women’s Studies. It is based on in-depth interviews with 50 women, using a purposive sampling strategy to ensure diversity and representation. The costs were tracked over three distinct phases; the abusive relationship phase lasting on average 15 years, the sanctuary and interim phase lasting on average 1.5 years and the relocation and recovery phase, spanning on average four years. Echoing the EU FRA prevalence study, emotional abuse was the most common form of coercive control.

Assessing the Social and Economic Cost of DV

Mary McDermott, CEO of Safe Ireland, said that as well as highlighting the enormous economic and social cost of domestic violence to women, children and the state, the report highlights the complex relationship between poverty, social exclusion and domestic violence.

“The relationship between poverty and domestic violence/coercive control is complex and circular, acting as both a cause and effect of poverty,” she said.

“When women are in, leave, or are recovering from an abusive relationship, they will face an increasing and real threat of poverty, especially where financial control has been a core element of their abuse. However, it is also the case that many women do not leave abusive relationships because of the threat of poverty and stigma. This hidden domestic violence/coercive control poverty trap needs close scrutiny and further research.”

Lost income/productivity emerged as the single major cost for women, equivalent to an average of €205,511 for those women who experienced income loss over the three phases (not all women experienced or reported income loss or indeed all costs).

Health costs were the most widely reported. In addition, women faced significant service bills such as legal costs, debt, damage or loss of property often caused by the perpetrator, as well as critical challenges with regard to housing and relocation in particular. A number of women became homeless as a result of domestic violence through their journey. The report also highlighted the prevalence and cost of ongoing or separation abuse, in particular the impact of ongoing financial abuse in terms of unpaid child maintenance or the use of child maintenance payments to exert control.

“The cost of domestic violence/coercive control both for individuals and families, as well as for the national economy, is substantial. Direct costs include expenses for services to treat and support abused women, their children and to bring perpetrators to justice,” she said. “The indirect costs include lost employment and productivity which greatly undermines women’s capabilities.”

She highlighted that twice as many women in the sample were unemployed at the time of interview than were at the beginning of the abusive relationship. Most had been driven into unemployment because of illness/injury and trauma due to domestic violence, or because the perpetrator prevented them from working, thus stalling their careers.

The interview-based methodology also meant that the researchers could identify the channels of help that most women seek along the way. They found that across the three phases, services in the domestic violence, healthcare, legal, criminal justice and judicial sectors were most commonly accessed by women. The primary entry point for support was through healthcare services.

Safe Ireland said that the findings of this research could make an important contribution to ongoing Government developments in the area of DSGBV, including the first national Audit of DSGBV, the ongoing Tusla Accommodation Review and the development of the third DSGBV Strategy.

The new Irish findings are in line with, and contribute to, the international evidence base for the cost of domestic violence. Research from the European Institute for Gender Equality (EIGE), released last week, has estimated that the cost of gender-based violence across the EU is €366 billion a year. Violence against women makes up 79 % of this cost, amounting to €289 billion.