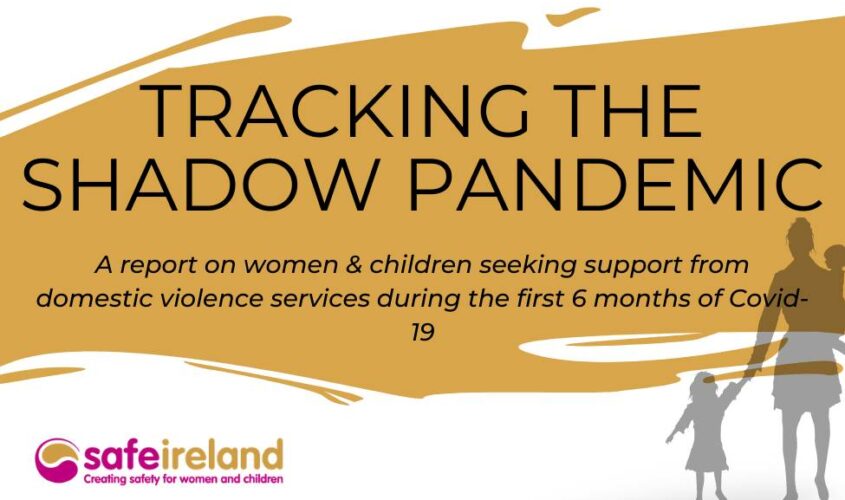 A new report from Safe Ireland, called Tracking the Shadow Pandemic, shows that a total of 3,450 women and 589 children who had never, as far as is known, contacted a domestic violence before, looked for support and safety from abuse and coercive control during the first six months of Covid-19, from March to August 2020.

This equates to 575 ‘new’ women and 98 ‘new’ children every month, or 19 new women and 3 children every day. New women and children accounted for 29% and 24% respectively of all those who looked for support from a domestic violence service during the first wave of the Covid crisis.

In total, at least 1,970 women and 411 children received support from a domestic violence service every month over the period. The tracking study is based on data collected monthly by Safe Ireland from its frontline member services, which is continuing through lockdown 2.

Mary McDermott, Co-CEO of Safe Ireland, McDermott said that the study traces the tragic story of the shadow domestic violence pandemic that unfolded during the first lockdown. It also underlines the enormous strains that services throughout the country were under, and now continue to be under, as they deal with the impact of lockdown 2.

She said that while Government has continuously name-checked domestic violence as a priority this has not been backed up by the resources and infrastructural modernisation that is needed.

The six month report also shows that 33,941 helpline calls were answered across the country over the period, that’s an average of 184 calls every day. By comparison, in 2018, domestic violence services responded to an average of 147 calls a day. The Covid call rate shows an increase of 25%.

On average, there were 191 women and 288 children staying in domestic violence accommodation (refuge, safe homes and supported housing) each month. At the same time, 1,351 requests for refuge – or 7 requests per day – could not be met as there was no space. However, services worked creatively to find alternative accommodation in the community.

“Since the start of Covid-19 the government has prioritised domestic violence and we have always welcomed this,” McDermott said. “But calling something a priority means that it also has to be name-checked in the national budget, and funded and resourced as a priority.”

“The number of new women and children who came forward during the first lockdown is eye-opening and indicative of the depth of hidden abuse and trauma in this country,” she continued. “Our member services have pulled out all the stops to respond to the increasing and complex needs of women and children since March. But this is on top of decades of coping with impossible conditions and demands. They are at breaking point now and can no longer be expected to work, without clarity, without adequate resources and within an antiquated infrastructure.”

Safe Ireland recommended that €7.5 million was needed for services in Budget 2021 to ensure that they can meet current and growing demands. To date, however, there has been no clarity from Government on how the hard pressed sector is actually going to be funded.

The sector is also looking for the urgent roll out of a funded national service development plan, as the start of a comprehensive and long-term response to the enormous everyday problem of domestic violence, exacerbated by Covid-19 lockdown.

The data collected reflects the anecdotal stories reported by services from March and August. Mirroring what Safe Ireland initially referred to as an ominous silence, the number of women accessing services decreased by 8% between March and April as lockdown restrictions came into full effect. However, since April, the numbers have steadily increased month on month. In July, at least 2,210 women received support from services, the highest amount of any month. August saw the highest numbers of children receiving support at 578, an increase of 36% over July figures.  July and August were also the busiest months for helpline calls. The data collection is continuing and will track activity during the current lockdown period.

Tracking the Shadow Pandemic – The Story from March to August 2020

We are recruiting for a Finance & Operations Manager