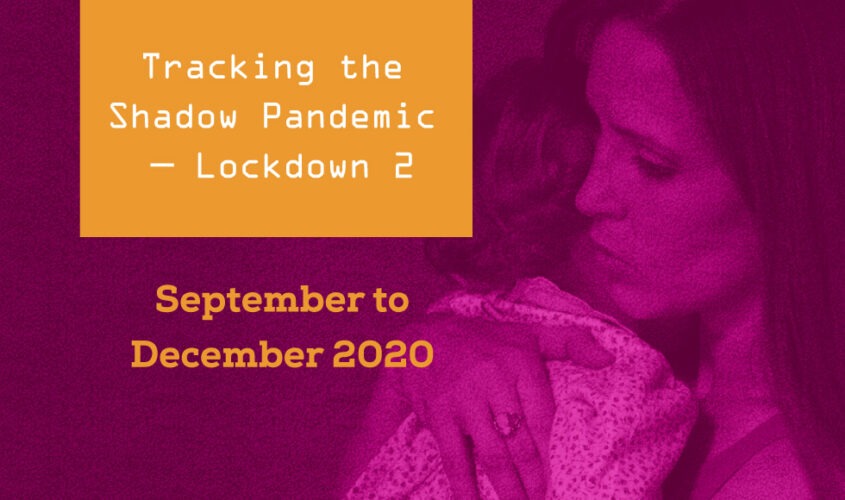 On average, at least 2,018 women and 550 children received support from a domestic violence service each month from September to December 2020, according to Safe Ireland’s second Tracking the Shadow Pandemic – Lockdown 2 report, published today.

November was the busiest month of the four-month period. When Ireland was at the height of its second Level 5 lockdown, over 2,180 women and 602 children received support from a dedicated domestic violence service. Safe Ireland is the national social change agency working with 39 member services across the country.

The statistics for the latter part of 2020 were higher generally than those reported over the first six months of the pandemic. The first Safe Ireland Tracking the Shadow Pandemic report, which covered the six month period between March and August 2020, showed that at least 1,970 women and 411 children received support each month.

Helpline calls were also up on average over the second part of the year. Domestic violence services answered 23,336 helpline calls over the period, an average of 191 calls a day, up slightly from 184 calls a day in the first six months of the pandemic. November was the busiest month of the period, with 6,409 calls answered – that’s 213 a day or nearly 9 calls every hour.

Mary McDermott, CEO of Safe Ireland, said that even in an extraordinary time of crisis, these numbers were shocking. Adequate resources and creative solutions were needed to respond to the needs of women but also the needs of the frontline emergency professionals responding to them, she said.

“Since last March, our 39 frontline-service member organisations have been working under enormous pressure to respond to those fleeing domestic abuse”, she said. “This frontline work cannot stop. It can take no breaks. From these figures we can see that somewhere, every day, in this small country, there is a woman, most often with children, looking to escape abuse and violence.”

“However, the dedicated professionals who provide the vital supports and services needed by women and children in their communities must also be adequately resourced. At the moment, and as a legacy going back many years, there are significant disparities between those working in DSGBV services and other social care settings. Parity and respect must be afforded DV frontline workers.”

She said that Safe Ireland continues to welcome the Government’s national prioritisation of domestic violence during the Covid crisis. But it was essential, she said, that a new, integrated National Services Development plan be put in place as a cornerstone of the forthcoming third National Strategy on domestic violence. Crucially, she said, multi-annual funding must be established to enable proper planning and service development. Ill-conceived technocratic processes hamper the urgent work of response and prevention of domestic violence.

On average 167 women and 265 children stayed in a range of domestic violence accommodation (range of refuge, safe homes and supported housing) each month between September and December. This is slightly down on those in accommodation over the first six months. In total, 808 requests for refuge could not be met in the four months because there was no space. This equates to 7 requests per day on average, slightly down on the first six months. In October, however, 306 requests for refuge could not be met, the highest for the tracked months of 2020.

On average 191 women and 288 children were in domestic violence accommodation each month. 1,351 requests for refuge could not be met due to lack of space.

Woman and Child – The most far reaching, creative and inspiring campaign...