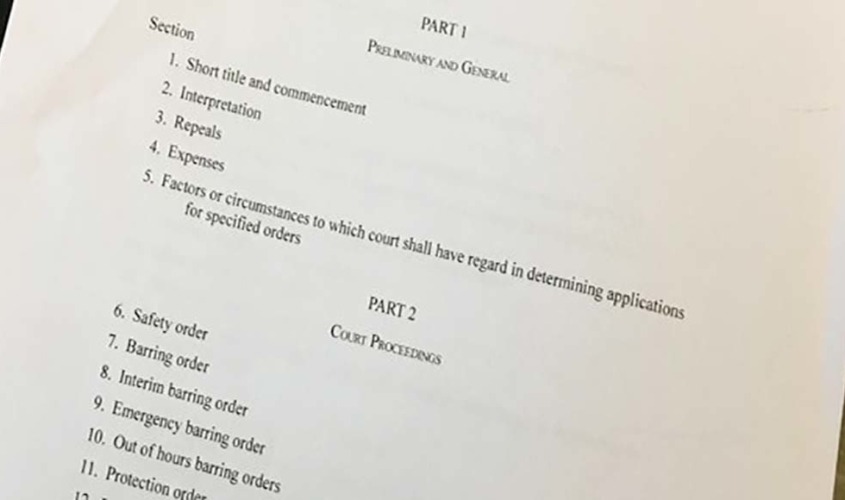 Oireachtas members are urged to do their best for those who are resisting the worst every hour and every day by prioritising the radical and robust Domestic Violence Bill.

Safe Ireland, the national social change agency working to end domestic violence, today urged the Oireachtas to prioritise the Domestic Violence Bill 2017 and to do everything in their power to ensure that it is enacted by the Summer recess at the very latest.

The Bill was passed by the Select Committee on Justice and Equality this morning (second stage). However, it is now almost seven years since the legislation was first promised by the previous Government in 2011 and a full year since it was introduced as a Bill to the Oireachtas.

The agency described the Bill as groundbreaking, strong and visionary. They acknowledged the dogged and Trojan work that has been done by Oireachtas members in Government and in opposition to refine the Bill to the point where strengthening protections and provisions agreed through amendments are “robust, radical and evidence-based”.

Caitriona Gleeson, Programme Manager with Safe Ireland, called for the same dogged determination to be shown now in bringing the Bill into law.

“Every day that this Bill is delayed is a further day that critical new protections are being denied to
women and children seeking protection and justice from our legal system,” she said.

“At a very minimum, there are almost 140 women calling domestic violence services every day,” said Caitriona Gleeson, Programme Manager with Safe Ireland. “These women and children are coming to us because their homes are tyrannies, because they are facing vicious violence, coercion, intimidation and fear. We are asking our political leaders to do their very best for those who are
resisting the worst every day.”

Latest Safe Ireland figures show that domestic violence services across Ireland answered 50,551 helpline calls in a year. This does not include the face to face support provided in that year to 10,101 women and 3,685 children (2016).

Safe Ireland welcomes particularly the introduction in the legislation of the new offence of coercive control, statutory guidance for the making of DVA orders and the recognition that an intimate relationship between a victim and a perpetrator will be regarded as an aggravating offence, moving away at last from the minimisation of the crime that has allowed it be sidelined as “just a domestic.”

It also welcomes the extension of safety orders to non-cohabiting applicants who do not have a child in common but who are in an intimate relationship. This, Safe Ireland said, represents a significant increase in the number of people who will be protected by the legislation.