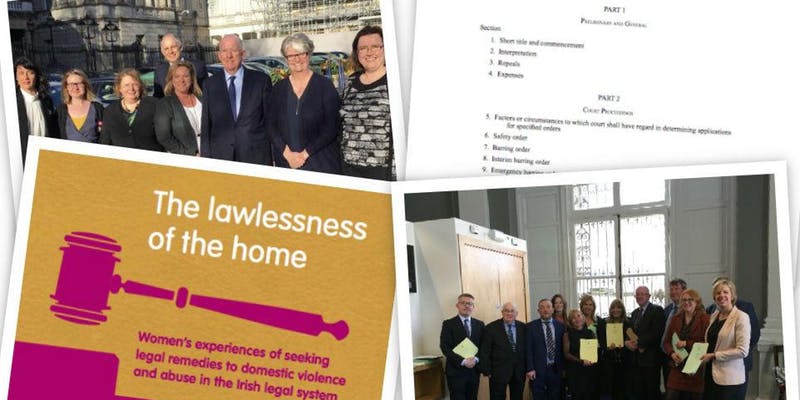 Criminalising coercive control represents a coming of age in Ireland’s understanding of domestic violence but it has to be implemented if it is to save lives, a Safe Ireland Seminar looking at new responses for a safer Ireland heard today.

Sharon O’Halloran, CEO of Safe Ireland, said that the creation of the criminal offence of coercive control in the new Domestic Violence Act 2018 is transformative and will help change culture in Ireland.

She welcomed the Government’s commitment to prioritising the commencement of the Act into law.  However, she said that it had to be followed up by three types of further convictions: “Firstly, convictions in courtrooms, crucially, conviction by the State to resource supports and training, and finally, conviction by each one of us to know what role we can play to respond effectively.”

She warned that domestic violence is too often escaping the attention of the community and of agencies, including those in social care and policing, because coercive control has not been taken seriously or has been minimised.

“For too long we have been having too small a conversation about too big a problem,” she said.  “If you wait for a severe injury before you identify domestic violence, then you are going to miss 98 per cent of cases. Coercive control forces us to focus not only on incidents of physical violence but on the cumulative patterns of abuse and the denial of human rights that is at the core of domestic violence.”

Safe Ireland also called on the Government to introduce domestic homicide reviews, to support the implementation of the new Domestic Violence Act, to increase understanding of how we can prevent fatalities. In the UK, coercive control has been recognised as a serious offence since 2015, where research has shown that coercive control was seen in 92% of domestic killings.

In addition, it launched Resolve – its new dedicated legal information and advocacy service to support women’s access to justice and the legal remedies soon to be open to them under the new Act.  Safe Ireland noted particularly that more research is needed to understand the responses needed for men experiencing violence in relationships.

O’Halloran said that Ireland has to take on the last “sacred” institution in Ireland – the home –  if it was serious about creating a society that is safe and equal for all.

“For decades, we have side-stepped, dodged and ducked taking on the last institution in Irish society – the home,” she said.  “Until we commit to this fully, we will not take on domestic violence.  We will continue to focus on the fabrication of danger to women from outside the home, rather than accepting that the real danger is from within.”

“This fabrication means that 79% of women do not report the tyrannies they are living in. It means that services are only working with eight to 12 percent of women and children experiencing domestic violence, unable to meet all their needs because they are not resourced to do so.”

Coercive control is a pattern of acts of assault, threats, humiliation and intimidation or other psychological or emotional abuse that is used to control and limit the freedom of an intimate partner or a family member.

In Ireland, one in three (31% or over 470,000) Irish women have experienced some form of psychological violence by a partner, according to a major EU wide study in 2014.  Every year, over 10,000 women and 3,600 children seek support and safety from abusive men.

The Seminar also looked at other criminal and civil law considerations and implications within the new DV Act, including the introduction of statutory guidance for judges in making DVA orders and the recognition that violence within intimate relationships is an aggravating factor in sentencing.