You are here: Home1 / About2 / Transparency3 / Governance

We are committed to providing vital support to women and children. As part of that, we strive to make Safe Ireland as effective as possible. An important element of that is having a governance structure in place that makes us accountable and transparent.

Safe Ireland National Social Change Agency CLG, trading as Safe Ireland, is a company limited by guarantee. It does not have a share capital and is registered in Dublin, Ireland. Registered company number: 291205.

Safe Ireland staff are experienced and committed. They work with the management team and the CEO to ensure the organisation is implementing its strategic plan. The CEO reports to the board of directors, who provide clear direction on important decisions. 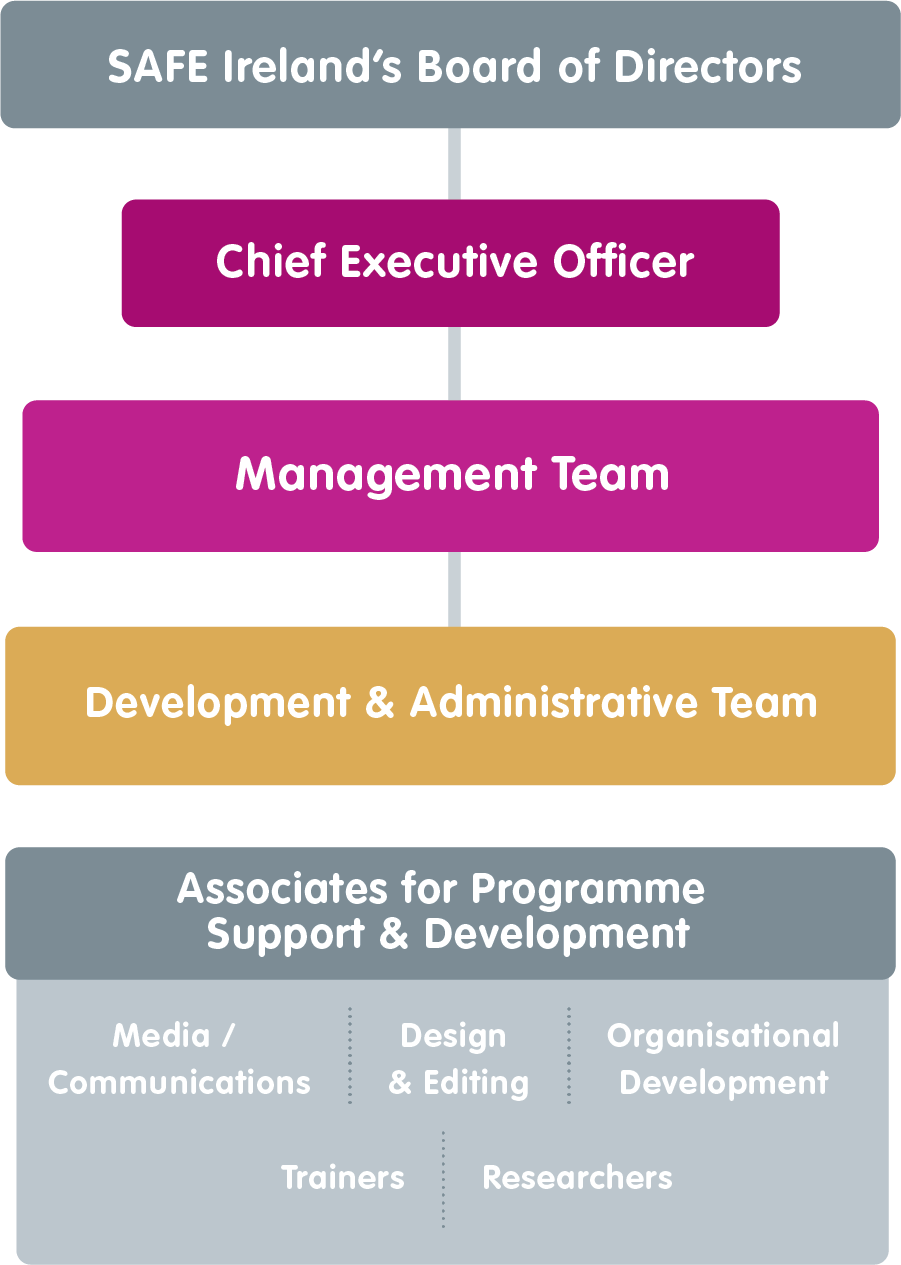 There are nine directors on the current Safe Ireland board. They provide vital expertise on:

Ann Larkin (Chairperson) began working with Women’s Aid Dundalk as a support worker in 2005 and from there she went on to serve as a Board member and held the role of Chairperson for nine years. Ann was recently appointed as Services Manager. Women’s Aid Dundalk provides a range of pre crisis, crisis and post crisis services for women and children experiencing domestic violence. Ann holds a BA in Business (Management Studies), IPASS Payroll Technician and a Higher National Diploma in Community Development.

Erengül Yoldas (Company Secretary) is the Commercial Director of Direct Medical since 2003. Direct Medical, which is based in Athlone Co. Roscommon, is a leading service provider in sleep diagnostics and therapy in Ireland. Previously, Erengül was Vice President of Pro-Tip Ltd with responsibilities for the dealer network, import, export, product training and sales from 1999 to 2003. Prior to that Erengül worked as a general nurse from 1994-1999 and she holds an MBA, and a BSc (Hons) in Chemistry.

Emma O’Mahony first started working in the area of violence against women while studying for her B.A. in Social Care in 1999.  Following this, Emma took up the position of Day Support Worker in ADAPT Kerry in 2006 before moving into the role of  Support Team Leader in 2013.  In this role, Emma had overseen the client support and childcare provision in Refuge and through the Outreach Service.  ADAPT Kerry offer short to medium term support to women and children who experience domestic abuse in Co. Kerry through their Refuge accommodation, Outreach Support and Court Accompaniment services.  Emma has since Acted as General Manager in ADAPT Kerry since 2017 and is hopeful for the future development of the service to ensure that Kerry becomes one of the safest counties in Ireland for women and children.  Emma is also currently studying a B.Sc. in Counselling and Psychotherapy to further her understanding and appreciation of what is needed to support women and children in crisis situations.

Elaine D’Alton is a community based activist currently coordinating the work of the Clare Women’s Network, which is part of The National Collective of Community Based Women’s Networks (NCCWN). Elaine’s key area of interest is Feminism. She has worked on women’s issues for over two decades, with a particular interest in the eradication of violence against women. Elaine has a Masters degree in Partnership and Politics from the University of Limerick. She is deeply involved and interested in the use of culture and the arts as tools for personal and societal transformation.

Emma Reidy has 15 years’ experience working in the area of domestic abuse in a frontline and senior management capacity. Emma has been working in Aoibhneas Domestic Abuse Support for Women and Children for 12 years taking on roles of relief worker, keyworker, outreach worker, interim deputy manager, manager and CEO. Emma has a bachelor’s (hons) degree in Social Science, master’s degree in Equality Studies, additional qualifications in Human Resource Management, Group Facilitation, Mentalization Behaviour Training and is in the process of completing a master’s in Business Administration. Emma’s area of focus in her academic studies was the role of women, family and conflict. In addition to her employment Emma has volunteered in specialist services that support women who experience domestic violence and women engaged in sex work. Emma has also worked with non-for-profit organisations in the areas of homelessness and housing.

Kathleen Chada is a nurse working in the area of Infertility for over 20 years. In 2013 her 2 sons were murdered by their father. And following this she became a founding member of SAVE (Sentencing and Victim Equality). SAVE is an advocacy organisation campaigning for greater justice for the families of murder victims in Ireland. They strive to tip the balance of justice in favour of victims over perpetrators.

Lisa Morris has over 14 years experience working in the Domestic Violence sector, namely at Amber, Kilkenny Women’s Refuge CLG. ‘Amber’ provides emergency Refuge accommodation and various support services to women and children experiencing domestic violence in Kilkenny and Carlow. Lisa has worked in many roles including Project Worker, Senior Project Worker, Acting Manager and then took on the role of Manager in 2015. Lisa has a BA (Hons) in Applied Social Studies in Social Care which she obtained from Cork Institute of Technology. Lisa has previous experience working with women and children experiencing homelessness also. She has a keen interest in being involved at a National level at working towards making Ireland the safest country in the world for women and children.

Carmel McNamee has been an activist in the area of Violence Against Women for the past 20 years. A founding member and current manager of DVAS Domestic Violence Advocacy Service (Sligo, Leitrim and West Cavan), she has also previously worked as a consultant with Safe Ireland. Carmel has been involved in community-based women’s education and is a volunteer facilitator with Danú Birth Mothers Support Group. Carmel’s key areas of interest is in Feminism. Carmel holds a BA in Business Studies (Training and Development) and a BA in Art and Design.

Emma Murphy has been a Domestic Violence activist since 2015, advocating for an end to gender based violence in Ireland and around the world. Emma has spoken at many conferences such as The 3rd World Women’s Conference (The Hague 2015), The National Family Violence Summit (Canberra Australia 2016), Tedx (Cyprus 2017), Safe Ireland World Summit (Ireland). Emma continues to share her message on the importance of understanding and responding to Domestic Violence. Through her advocacy work Emma started working in Saoirse Women’s Refuge in 2018 as a Support Contact worker, directly supporting women and children who have fled their homes. This came after Emma qualified successfully in DKIT after studying Level 8 in Understanding and Responding to Domestic Violence. Emma is currently working on the importance of 10 days paid leave for anyone experiencing Domestic Violence in the home and spoke in Leinster House alongside ODVSS on the why this legislation being passed is so important and the benefit it will have to anyone experiencing such trauma.

Board Meetings held in 2019

The Board of Safe Ireland held 8 Board meetings during 2019 with an overall attendance of 89%.

The Board is supported in its work by a:

Code of Governance Principles and Policies

You can click this button at any time to leave this site.